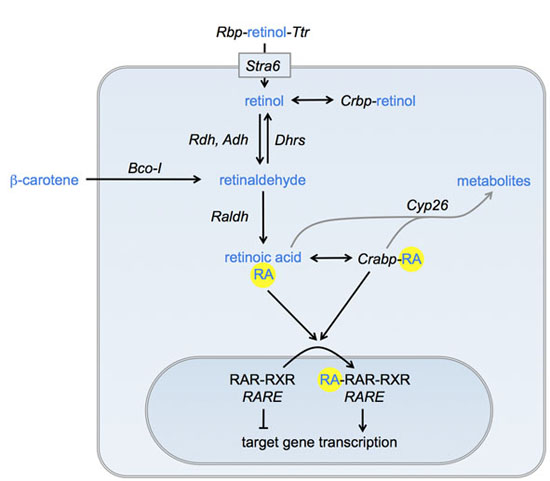 Our lab is interested in the various roles of the retinoic acid (RA) signaling pathway in development and regeneration. Our model system is the zebrafish. We have been using this model organism to enhance or repress RA signaling, based on genetic and pharmacological manipulation of the proteins that contribute to RA synthesis, breakdown or ultimately target gene activation.

We have shown that controlled regulation of RA signaling plays important roles during the regeneration of the zebrafish fin after amputation: RA promotes the proliferation of dedifferentiated bone cells (osteoblasts) in the stump and the blastema, while its inactivation allows differentiated bone cells to switch into a dedifferentiated state and back again. We further found that a RA-free niche is established in the fin epidermis that orchestrates the correct positioning of preosteoblasts in the exact places where new fin rays are to be formed during regeneration. The RA-free niche plays another important role during regenerative outgrowth, where it facilitates the proliferation of preosteoblasts through the signaling protein Sonic hedgehog.

The paired fins of zebrafish are homologous to the fore- and hindlimbs of four-legged vertebrates, such as amphibians, birds and mammals. Limb development is regulated mostly by the same signaling pathways. Nevertheless, a number of genes are differentiallly involved in the development of either limb type and it currently is debated whether RA signaling is required at all for the formation of hind limbs in mammals. We are investigating whether RA is required for hindlimb development and are using genetic means to manipulate its signaling activity.

Funded by the DFG.

Development of the zebrafish gills

The majority of fish use gills for gas exchange. To provide the large surface required for this task, pharyngeal arch arteries form a capillary network inside the gill filaments. Teleosts, like the zebrafish, possess four gill-bearing arches. Gill filaments emerge as finger-like structures along the outer surface of the embryonic gill arches. On their dorsal and ventral surface, gill filaments form folds called lamellae, which act as the interface for gas exchange between blood and water. We are interested in the early steps of gill filament formation: Which signaling pathways control their outgrowth, what are the roles of the filament cell types, and which cell lineages exist in gill filaments?

Funded by the University of Bayreuth

Enhancers are sequences that control the activity of nearby promoters. In embryos, they are responsible for the activation of genes that coordinate tissue and organ development in a spatially and temporally coordinated manner. Interestingly, many enhancers are transcribed themselves, producing transcripts known as enhancer RNA (eRNA). eRNAs are short-lived and retained within the nucleus. Evidence is accumulating that eRNA synthesis, enhancer activity and gene expression are linked. To answer the question if neuronal eRNAs are conserved between fish and other species, we will examine the developmental profiles of eRNA synthesis during zebrafish early development. Another goal is to determine which roles neuronal eRNAs might play in gene regulation.

Funded by the DFG Priority Programme 1738